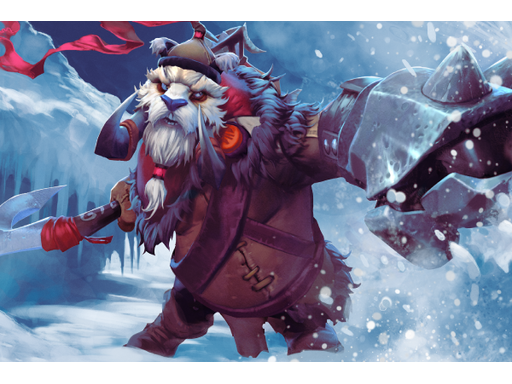 Nice was a brawl! After her, in the tavern “Wolf Hole”, only Ymir remained on his feet - he was Tusk, he was Horror from the Barrier, he was also the Snowball from Cobalt - the only one who managed to defeat one notorious spiked bouncer in an honest fight. It all started with a harmless dispute “who is who?” ... As a result, the innkeeper did not have a single bottle, a jug or a chair, and four regulars, one blacksmith and six of the best warriors of the Frost team went into a deep knockout in the midst of the fragments. Contemplating this picture, Ymir proclaimed a toast in his honor and drained a cup of hops. As soon as the losers came to their senses, they immediately began to demand revenge with higher stakes. It was only joy for Emir, only he doubted whether these poor fellows had at least something for their souls. Terrified by the pogrom, the innkeeper went on a trick, just to prevent another brawl. Ymir, despite his excellent skills, never participated in a real battle, didn’t know the chaos on the battlefield and didn’t know what death is inaudible, and therefore the innkeeper offered him a new bet: to participate in the largest battle, no matter which side, survive, and even defeat the enemy. Well, what is at stake? A good portion of booze at the expense of the establishment.

Tusk is a melee hero whose main attribute is strength. His first ability, Ice Shards, compresses shards of ice into a ball of cold energy, which deals damage to all the enemies he touches. When the ball reaches its destination, the fragments will be released, creating a barrier. The second ability, Snowball, begins to fold Tusk into a snowball. Allies within a radius of 400 can be placed in a com by right-clicking on them, even if the com is already moving. After starting, all enemies in the path of the coma will be stunned and take damage. The more allied heroes are in a coma, the greater the damage from it. You can start the com right away using the Launch Snowball. The third ability, Tag Team, creates an aura around the hero, allowing him and allied heroes to inflict additional damage and slow down the enemy. The ultimate ability, Walrus PUNCH !, gives Tusk a critical strike and throws the victim into the air with the next attack. After landing, the victim will be slowed down. Improving with Aghanim's Scepter adds the ability of Walrus Kick, which kicks the target and slows down for a while.

Ice Shards is one of Ymir’s key skills, which is often pumped in the first place and is very important. The fact is that in addition to damage, the ability creates an obstacle. One successful use of the ability allows you to lock the enemy and prevent him from retreating. The range of the ability is as much as 1800, which is incredibly large by the standards of Dota. This allows you to effectively finish off fleeing enemies. The skill is especially effective against enemies who have no jumps or ways to overcome an obstacle. In any case, the enemy team will have such heroes and Tusk will be able to realize his potential. It is important to understand that the ability is aimed at the terrain and you must always take into account the speed of the projectile. It may happen that you use the ability and it does not have time to reach the enemy, and in this case you will create a barrier for your allies, that is, save the enemy’s life. In peacetime, the skill can be used for farming, as it deals good damage in a small radius.

The advantage of this skill is that it can be easily applied to an enemy with immunity to magic, that is, the enemy will not receive damage, of course, but the barrier will still be created. Although the barrier is not deaf (that is, only a semicircle is created), but it exists for as long as 7 seconds and this is more than enough to comfortably kill the enemy. Of course, when you are more or less used to the skill, you will realize that it is very beneficial to lock your enemies in the woods or on some narrow paths. The width of the barrier is decent and you can close it with a huge passage, but as mentioned above, you need to get used to it a little.

In most cases, Tusk is sent to suffer on a difficult line, since in other positions this hero will be less useful. It is also possible to play the game on the center or even on the easy line, but I would definitely not recommend these positions to the beginning player, since there is a good chance that you will not be able to play well and eventually start pulling your team to the bottom. On a difficult line, we only need to stand calmly and, if possible, finish off creeps. If there are 1-2 passive heroes on the line in the opponents, then it will be just fine, since we can quickly collect gold for boots and some simple items and consumables. You should not hurry to leave the line, try to farm as much as you can. It goes without saying that it’s not worth the risk. If the enemy is clearly looking for opportunities to kill you, then play more carefully and just do not let the enemy draw a line. The hero’s attack animation is more or less normal and the damage from the hand is good, so in any case we will receive at least some farm near our own tower. The advantage of the complex line is that here Tusk will gain a lot of experience, which means we will pump our skills faster. I recommend that you always keep a Town Portal Scroll teleport scroll with you.

This is a great way to save your life, and you can also use the scroll to quickly move to the problem line and help allies. Be sure to keep track of what the situation is on the other lines. The fact is that Ymir has good potential for the Ganges, not the best, but sufficient for an effective attack. If for example you see that somewhere the enemy is clearly crushing your allies or playing too carelessly, then you can try to make a gang of this very line. You can use the same teleport to move to the line, but in addition I would recommend learning to use Smoke of Deceit smoke. All the same, this is a very effective way to get as close to enemies as possible. Even if there are no options for the gang at the beginning of the game, then when you buy Shadow Blade (if your build certainly provides for the purchase of this item), you must definitely start looking for opportunities for the gang. It’s worth mentioning right away that even though Tusk has good damage, especially when using the ult, your own attack may not be enough to kill the enemy and it is better to always attack with the support of allies. Do not be greedy and, if possible, leave frags to your carry hero. Tusk does not need much gold, and even with a minimal set of items, this hero can do a lot. During the gang, you can use a simple scheme: we turn into a ball and take with us those allies who need to get closer to the enemy. During movement, we use a barrier and block the enemy’s path to retreat. Then we calmly beat the enemy and hope that he does not have time to get around the obstacle. In fact, even such a simple trick requires practice and it is especially worthwhile to pay attention to the barrier, since very often beginner players use the skill straight at the enemy and the enemy manages to run back. Accordingly, a barrier is created in front of our nose and we ourselves spoil the obviously good gang. Of course, in the first games everything will not get the way you planned, but the most important thing is not to give in to emotions and not pay attention to inadequacies in the team. Just train and grow. Over time, you will realize that Tusk is not as complicated as it might seem at first glance.

Unfortunately, for some reason Tusk is taken very rarely, although the hero is quite playable and incredibly useful for the team. At a low rating, of course, realizing the hero’s potential is very difficult, since Ymir is very dependent on the actions of his team, but even among beginners sometimes come across sensible players, with whom you can kill a huge number of heroes. Once again, Tusk is an interesting hero and it’s definitely worth playing.